* In case of any delay in receiving the OTP, you may verify it later. Please proceed without verification.

Your mobile number is not registered with us. Please register your mobile no.

Shirdi a small spiritual hamlet located in Ahmednagar district of Maharashtra.spread over a tiny area of 2 sq.km. The place is regarded as abode of  Shri sai baba.The tranquility associated with this place is the driving force for all devotees. The sacred shrine where the immortal remains of saint and guru sai baba remain which is popularly known as samadhi among tourist is a place to find peace. The message of universal brotherhood, tolerance and respect for all religions is enshrined in the heart, mind and soul of all sai devotees.

Sai baba is believed to have spent for than 50 years of his life living in this place. The number of tourists visiting Shirdi is maximum on thursdays as special prayers are conducted on thuradays. Also some special occasions like Gurupurnima, Dusshera and Ramnavmi witness huge footfalls to pay their respects. The gates are opened at 5 in the morning as the prayers start at that time and closed at 10 in the night. The main hall of the temple has a capacity of 600 people. The first floor of the temple has a gallery of pictures depicting scenes from the life histroy of sai baba. That gallery is always flooded with sai devotees visiting that gallery and hence learning lessons from the life of sai baba which ultimately helps them to live a meaningful and peaceful life.

Some of the main places associated with the life of Sai Baba and frequented by tourists are;

The entire tourism of Shirdi revolves around this place. The place where the remains of sai baba still exists. According to historians a wealthy tycoon from Nagpur Sreemant Gopal rao started with the construction of this temple to place the idol of lord Krishna. People from all backgrounds, beliefs and cultures stand in long queues and wait for their turn to catch a glimpse of Sai. 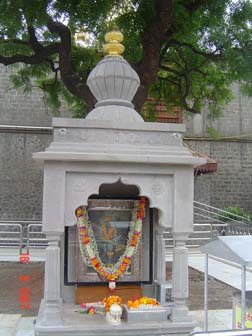 Gurusthan is that place where sai baba was first spotted by the local people as a child. Owing to the special significance this place has the shrine board which looks after the temple's management has constructed a small temple at this place. 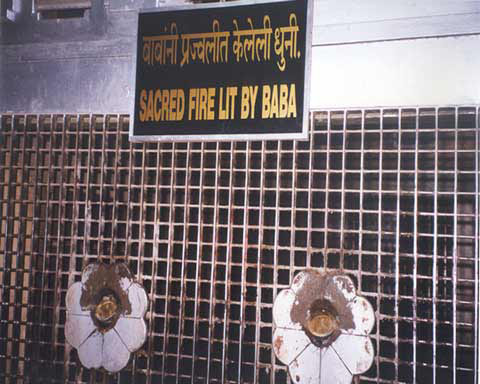 The mosque where sai baba used to live and sleep is known as dwarkamayee. It is situated towards the right of the samadhi mandir.It is said that baba spent most of his time at this place. The name dwarkamayee itself was given by sai baba himself. In this place there exists a huge stone on which sai baba used to sit and interact with his disciples. The stone exists even now.

Another thing of interest is the fire or dhuni which sai himself lit. The ash from this fire is considered to be magical. Dwarakamayee is also divided in two floors. The ground floor has two rooms. One which carriers the chariot and sedan of sai and another which has paintings. One among the paintings is a huge life size which was received by sai himself. The second floor has the stone. The stone is on which sai used to have bath.It has some oil paintings which are creative marvels.