MPs and MLAs from Shirdi 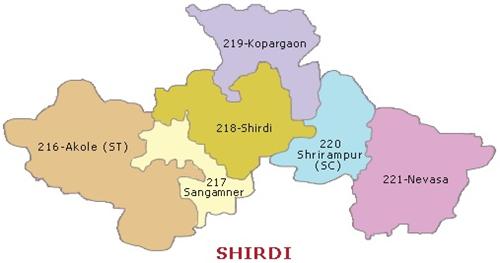 India is the largest democracy of the world. The festival of Democracy i.e elections are celebrated every 5 years. The citizens get the right to exercise their vote and choose the candidate which they think is their best representative. The chosen representatives in turn have a difficult task to live upto the expectations of people.

The Parliamentary constituency of Shirdi which was formed in February 2008 with the implementation of delimitation and is one among the two seats from the district of Ahmednagar.

The sitting MP from this seat is Mr. Bhausaheb Rajaram Wakchure from Shivsena (since 2009). He won by defeating Ramdas athavale of RPI (A). He got 54.21 % of total votes casted. He has the honour of being the first MP from this newly craved seat.

The MP is also a former Chief executive officer of Sai Sansthan. He holds a post graduate degree and has been on various official posts in government from past 40 years. His work as T.P.O and B.D.O was applauded everywhere. Some of the other posts held by him are.

Explore more about Administration in Shirdi