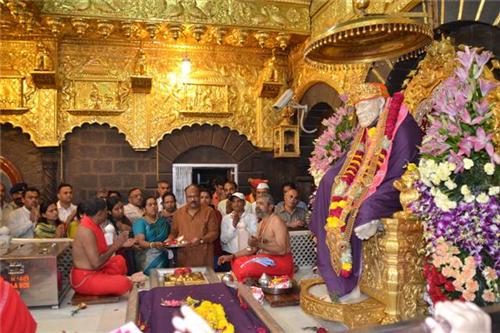 In geographical terms Shirdi is a small town in Maharashtra but on a larger front Shirdi is melting pot of different cultures. At any point of time you would see people from different faiths and culture walking down the premises of the Shirdi Sai Baba Temple with just one thing in common, a complete devotion to Sai Baba.

Long time ago Shirdi was just a small village where you would mainly find people who belonged to the Marathi community, Shirdi being a part of Maharashtra state, settled here. However, with the gradual increase in the fame of Shirdi as a pilgrimage centre things changed. People from different parts of India came to settle here in a lure of good income for their livelihood. But the migrant population that came from Andhra Pradesh topped the population of outsiders in the little village, amounting to around 10% of the total population of Shirdi, which even today is not more than 26,000. The number of people from Andhra Pradesh has increased so much that you would be surprised to see the boards of various businesses written in Telgu, the native language of the state. It is also interesting to note that Andra delicacies are quickly replacing the good old Marathi dishes.

Along with the Hindus you would also find a decent population of Muslims living in Shirdi with complete communal harmony following the principles of Sai Baba.

Before Shirdi became popular as a pilgrimage centre, Marathi, the state language was the most commonly spoken language in the village. However, after the death of Sai Baba and the gradual increase in the number of religious tourists, the native began to communicate in Hindi, English, Marathi as well. And in the recent decades, surprisingly Telgu, the state language of Andhra Pradesh, is spoken more than Marathi all due to the large number of visitors from Andhra Pradesh. It is also quite common to see the names of the hotels written in Telgu.

Being a Maharashtrian state, the traditional attire of the people living in Shirdi resembles that of the other towns and cities in Maharashtra. For example, the traditional or elderly women folk of Shirdi are usually seen wearing a special type of saree called Nauvari, tied somewhat like a dhoti while the men wear a dhoti along with a shirt, known as pheta in Marathi, and a cap with multiple folds made out of cotton or silk. The cap or the headdress is known by various names such as Pagadi, Patka, phet and rumal. But, like other places in India, urbanization has hit this small town as well and most of the younger population is now seen wearing jeans, three-fourths and other western style clothes.

Shirdi is quite inseparable from Sai Baba and so are the festivals here, which depict a beautiful amalgamation of festivals from both Hindu and Muslim faiths. Most of the festivals are celebrated with great enthusiasm and zest in Shirdi, but being a religious tourist place the atmosphere during Ramnavami, Gurupurnima and Shirdi Vijayadashmi is worth a visit. The zest and zeal with which people from different faiths combine to celebrate is quite commendable.

Ramnavami, a HIndu festival, which is celebrated as birthday of Sri Rama, in most parts of India is celebrated in a much different way in Shirdi. Ages ago when Sai Baba was alive, a man named Gopalrao Gund sought permission from Baba to hold Urus in his name as a token of thanks for having been blessed with a child after many years of marriage. Baba agreed to his proposal on the condition that the Urus, a Muslim festival, be celebrated on Ramnavami. And hence, the Ramnavami in Shirdi is no ordinary festival but a festival where people of both faiths join their hands together to celebrate this auspicious day.

The festival is celebrated every year in the month of March or April and you can see some interesting rituals taking place at this time. The wheat sack kept in Dwarkamai is replaced with a new one each year at this time and the old one is taken to the prasadalaya to be cooked. Another ritual specific to this festival in Shirdi is the replacement of flags in Dwarkamai at this time every year.

The festival is of great importance as this was the day when Sai Baba passed away and hence is also celebrated as Shri Sai Punyatithi. This is another big festival of Shirdi where large numbers of devotees gather from all parts of the world and participate in various religious activities. One of the main attractions of this festival is the "Brahman Bhojan" along with Dakshina or Donation to Guru.

Gurupurnima is the only festival that Baba had asked his devotees to celebrate. And thus, every year during the full moon devotees from all over the place flock here to honour Sai Baba and seek his special blessings.